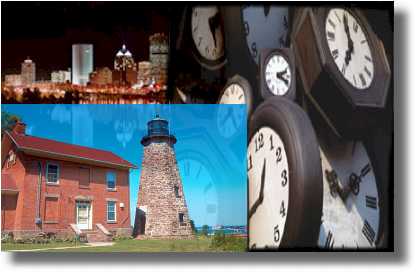 A Rochester Timeline listing for you:

If you would like to discuss any history or timelines related to Rochester, feel free to contact us via our form.

1500 years ago: The Senecas make good use of the forests and waters of the area, hunting and fishing, and building homes for themselves. They make longhouses out of trees and elm bark, and build a fort near Victor, Ontario County.

1789: Ebenezer Allan erects a gristmill on the Genesee River.

1828: Reynolds Arcade, a Rochester institution and a prototype of a 20th century shopping mall, is built. Rochesterians receive their U.S. mail, shop, and obtain other services. Both Bausch & Lomb, and Western Union Telegraph Company are founded here.

1847: Frederick Douglass moves to Rochester. With money raised by English and Irish friends, he buys a printing press and begins publishing the abolitionist weekly North Star. He continues publishing it until 1851.

1850: University of Rochester is founded as a Baptist-sponsored institution. The University opens as an all-male institution with 60 students in its first year. The United States Hotel, on Buffalo Street, now West Main Street, is the first home of the University.

1890s: Jacob Myers’ automatic voting machine is the first mechanical device used in a public election. Frederick Douglass monument is unveiled at St. Paul and Central Ave. Barbers close on Sunday, leaving patrons upset that they have to shave themselves.

1900: Eastman Kodak introduces the Brownie Camera. It costs $1, and film is 15 cents. Susan B. Anthony persuades Rush Rhees, president of the University of Rochester, to admit female students.

1941: Last trolley car ends service and is replaced by bus; trolley tracks removed from Four Corners. Statue of Frederick Douglass is moved to Highland Park. After bombing of Pearl Harbor, blackouts are ordered and Cobbs Hill Reservoir is put under guard.

1949: WHAM television (now WROC) begins broadcasting with special programs from Chamber of Commerce Building; 61,000 homes are within range of signal by end of 1950. Eastman House, formerly George Eastman’s residence, opens as a museum.

1956: Passenger service ends on subway, part of which is to be replaced by the Eastern Expressway.

1972: New nonpartisan school board kills busing plan and and replaces it with open enrollment plan to promote integration. Bandits get $836,000 in cash from armored car in front of Kodak’s Hawk-Eye Works. 26-story Lincoln first Tower is completed.

1986: More than 4500 jobs cut at Eastman Kodak Co. Louise M. Slaughter, D-Fairport, is elected to Congress, defeating incumbent Fred J. Eckert. He announces, ” I will sift through offers. The worst thing that could happen to me is I might become wealthy.” Seven women are arrested for going topless at Cobbs Hill. Later, two of the “Topfree 7” appear on a national talk show.

1988: Eastman Kodak Co. chemicals are found in the ground water near Rand Street. A controversy ensues , though no evidence of a health hazard is found. Work begins on the untangling of the Can of Worms – the intersections of Interstate 490, Interstate 590, and route 590.

1990: Arthur J. Shawcross, 45, is charged in the serial killings of 11 women. And is later sentenced to 250 years in state prison. Sibley’s downtown department store closes. Rochester Police Chief Gordon Urlacher faces embezzlement charges. The Hyatt hotel is no longer stalled as millions of dollars are pumped into the project.

1991: March ice storm leaves 250,000 homes and businesses without power. Can of Worms renovation project is completed. Journalist Terry Anderson, formerly of Batavia, freed after more than six years of captivity in Lebanon.

1998: Xerox announces layoffs of 9,000 worldwide. Rochester’s Betty Tyson is freed after 25 years in prison. Judge rules she was wrongly convicted in killing. The 150th anniversary of first women’s rights convention in Seneca Falls is celebrated. Bishop Matthew Clark removes Father James Callan from leadership of Corpus Christi Church because of his departures from Roman Catholic teachings.

1999: Kodak to abandon its Elmgrove manufacturing complex in Gates. Layoffs will drop the company’s Rochester work force here to under 24,000, lowest since the 1940s.

2013; Kodak exits bankruptcy. The new, smaller Kodak has shed the cameras, film sales and consumer photo developing that made it a household name, focusing on printing technology for corporate customers, touch-screen sensor components for smartphones and computer tablets, and film for the movie industry.